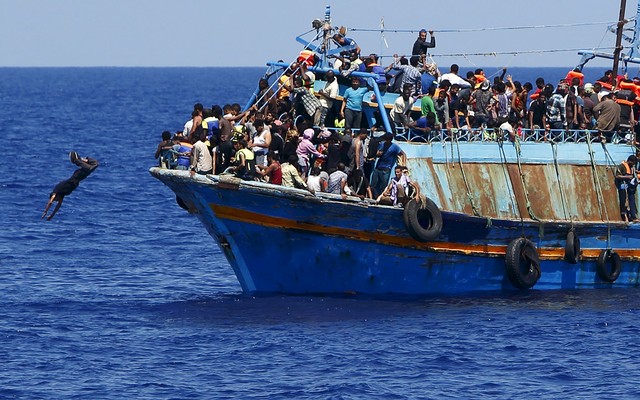 Migration is a decision that impacts the welfare of the household, the home community, and in the end the whole economy in various ways (Azam and Gubert, 2006). For the sake of clarity, understanding the meaning of emigration, migration and immigration is of great importance. According to the oxford dictionary, emigration is the act of leaving one’s own country to settle permanently in another country, immigration on the other hand is the action of coming to live permanently in a foreign country, and migration is the movement of people to a new area or country. Emigration was interchanged with migration to refer to the movement of Libyans from their country to Europe. Africa’s association with migration is not a recent news but a long time story. Migration has affected development in Africa in a wide range of ways both positively in terms of human capital formation and negatively in terms of migration of skilled human resources (brain- drain) from the economy. The African human resource pool is continuously depleted as the educated choose to emigrate and apply their knowledge and skills abroad. A cross-country study of 71 developing countries found that a 10 percent increase in per capita official international remittances will lead to 3.5 percent decline in the share of people living in poverty (Adams & Page 2005). The country has always been both a final destination for migrants and an intermediate stop for those who wanted to reach Europe. Before the removal and the death of Libya dictator Gaddafi in October 2011, about 2.5 million migrants is said to have lived in Libya, coming from countries as far as Bangladesh and the rest of Africa. This is because the country was seen as a transit country to get to Europe through the Mediterranean Sea. The peak of migration flows from Libya are the result of the security situation in the country, the strength and connection of criminal networks managing human smuggling and the emergence of conflicts and humanitarian crises as a result of the civil war. This led to the collapse of the central government and brought about the establishment of two ineffective governments in Tobruk and Tripoli, which ended up not controlling what was left of the government infrastructure.

While migration has economic, social, and cultural implications for the home and host societies, remittances the migrants send home are perhaps the most tangible and least controversial link between migration and development (Ratha, 2007). Migration and remittances have both direct and indirect effects on the welfare of the population of Libya. But this has not been actually the case for Libya because before the removal and death of Libya dictator Gaddafi, about 2.5 million migrants is said to have lived in Libya, coming from countries as far as Bangladesh and the rest of Africa and then looking for ways to transit to Europe. This therefore means that immigrants who are not Libyans who transit from Libya through the Mediterranean Sea to Europe will not at the end send money back to Libya but to their home country. As a result of this, the effect of remittance from migration has not reduce the depth and severity of poverty in Libya.

Another negative effect of emigration in Libya is the migration of highly-skilled human resources especially in the area of education and health which can imply a loss of public resources invested in education and health, therefore reducing Libya productive capacity, and worsen the business environment. The emigration of the highly skilled can be particularly important in the education and health sectors in small countries that face severe shortages of health workers (Docquier et al. 2010b). This could be seen during the civil war as Libya had shortage of health workers to treat the wounded and this eventually led to humanitarian crises in the country. A way for Libya to alleviate the negative impact of brain drain is to facilitate the return of migrants and their reintegration into their country, and devise ways of using those skills.

The cost of the political conflict has taken a severe toll on the Libyan economy, which has remained in recession. Political strife, weak security conditions, and blocked oil infrastructures continue to constrain the supply side of the economy. According to the World Bank report on Libya, the GDP of Libya was estimated to have declined by 10 percent and per capita income has fallen to less than US$4,500 in 2015, compared to almost US$13,000 in 2012. Production of crude oil fell to around 0.4 million barrels per day (bpd).

In conclusion, while Libya have large stocks of immigrants, there are no explicit policies on how to deal with immigration or the capacity to manage their borders effectively. As a result of the civil war, immigrants were use as militants to fight in the civil war and eventually led to a formation of a strong armed terrorist group (Al-Jama’a al-Islamiyyah al-Muqatilah bi-Libya). Migration and remittances can be a valuable complement to broad-based development efforts. Yet, migration and remittances (collective or individual) should not be viewed as a substitute for official development aid as they are private money that should not be expected to fund public projects. Harnessing the development potential of migration and remittances by increasing the awareness on the need for migrants from Libya to come back home or make contribution after acquiring the needed skills from their host countries, and also improving data on remittances and migration. But a question keep rambling my head, why are migrant still using Libya as a transit country to get to Europe even with the civil war going on, and nothing really effective enough has been done by the EU to completely stop this method of migration? Every day migrants keep drowning in the Mediterranean Sea or better still are saved by the Italian coast guard.

8 thoughts on “Migration in Libya: the transit country to Europe”